Although the acronym COPD may not sound like a familiar health condition, it’s the third most common cause of death by disease in the USA. Chronic obstructive pulmonary disease affects more than 15.3 million Americans, deteriorating the quality of life and shortening lifespan.

While doctors consider COPD incurable, researchers are analyzing the efficacy of several potential treatment methods that can help patients manage their symptoms on top of introducing necessary lifestyle changes.

There’s some evidence that supports the health benefits of CBD oil for COPD. There’s a link between CBD use and bronchodilatory effects; CBD also reduces stress and anxiety on top of providing pain relief and higher levels of oxygen. All these qualities show promise in treating a range of lung diseases, including COPD.

Today we discuss the potential benefits of CBD oil for COPD; we’ll also cover different forms and dosages of CBD for first-time users. 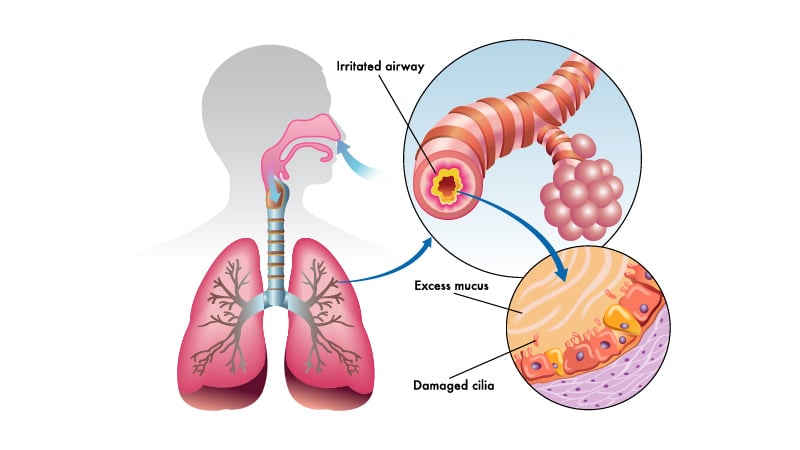 COPD stands for chronic obstructive pulmonary disease. As a progressive lung condition, it makes breathing increasingly difficult for patients over time. COPD stems from inflammation in the lungs, which causes swelling and thickening of the airways. It also limits the oxygen exchange in the lung tissue, leading to compromised airflow in and out of the lungs. It also causes problems with removing carbon dioxide.

Breathing difficulty is the telltale symptom of COPD. Having problems with oxygen exchange makes it difficult to stay active, work productively, and live a happy life.

When you’re exposed to irritants on a regular basis, they may harm the lungs and airways, spurring the onset of COPD. Smoking is the most common irritant, which places tobacco smokers in a high-risk group for developing the condition.

However, a nonsmoker can have COPD too. There are additional risk factors, such as toxins, secondhand smoke, or other contaminants, such as radiation or air pollution. Some people are genetically predisposed to this ailment due to a rare mutation known as alpha-1 antitrypsin deficiency.

When untreated, COPD can wreak havoc on your health, causing lung infections from low levels of oxygen in the circulatory system.

The Symptoms and Diagnosis of COPD

There are a few symptoms that may indicate the onset of COPD. If you experience any of the following symptoms, you should talk to your doctor:

In order to get a COPD diagnosis, you must have the following:

Lung function tests are often performed to determine if a person has COPD — these tests are called spirometry.

Spirometry is a simple breathing test that may be able to diagnose COPD and define its stage. You take a deep breath and blow hard into the mouthpiece of a device known as a spirometer. Then you inhale medicine that opens up the lung airways — blowing the tube for the second time.

The doctor will use these two figures to create a third number that informs you about your lung function. If you score below 70%, you have COPD.

There are also a few other tests that thoroughly examine different stages of this condition: 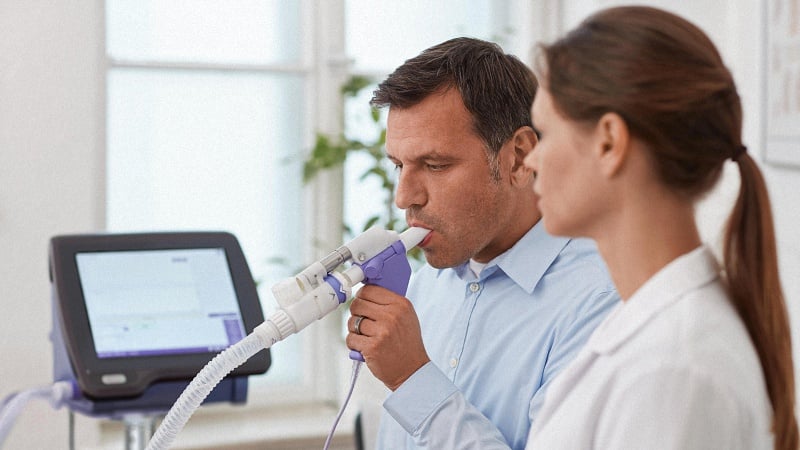 While COPD cannot be cured, it’s important to remember that you can take certain steps to slow down its progression and minimize the negative impact it has on your health. Once you’ve done too much damage to the lungs, you may not be able to bring them back to their full health and function, so it’s paramount to act as fast as you can once you’ve received a COPD diagnosis.

Here are some of the most common treatment options for people with COPD:

The majority of COPD cases require patients to use several different measures to manage the condition. On top of introducing the above treatments, it’s recommended to take some necessary lifestyle changes. Your doctor and dietician are the best people to talk about COPD treatment, but it’s always a good idea to do your own digging.

If you’re concerned about the safety and efficacy of traditional treatments, you may consider natural remedies, such as CBD oil.

Does CBD Oil Help with COPD?

COPD therapies are aimed at stopping the progression of the disease and to enhance lung function. Many people get great results using a combination of oxygen therapy and pulmonary rehabilitation. However, symptoms like lung inflammation and airway swelling are where the true problems begin.

That’s where CBD could help.

Although the research into the health benefits specifically for COPD is scarce, CBD has been highlighted as a potent anti-inflammatory in numerous studies. It also has anti-microbial properties and can regulate the body’s internal balance (homeostasis) through its interaction with the endocannabinoid system (ECS).

The ECS is a complex cell signaling network in the body that regulates the functioning of the other organ systems, including the immune system, digestive system, and central nervous system. Cannabinoid receptors (CB1 and CB2) are spread throughout the body and are responsible for the physiological and psychological effects of plant-based cannabinoids such as CBD.

The activation of CB2 receptors triggers a variety of effects, from anti-inflammatory responses to pain relief. CBD is said to have similar anti-inflammatory benefits for COPD to a newly invented drug called roflumilast. I

If you’re considering taking CBD oil for COPD, you’re probably wondering if there’s any scientific evidence to back up the aforementioned benefits.

Here’s everything you need to know.

Medical Studies on CBD for COPD

Read More: CBD Oil for COPD: How To Use Hemp Products for Lung Disease?