The evolution of the cannabis market has seen a number of B2B trade shows and conferences pop up throughout the country. The vast majority offer a fairly standard mix of panels, exhibits, and cocktail hours targeted at professionals across the board.

MJ Unpacked, however, is one B2B cannabis event that stands out from the crowd.

Attracting high-level decision-makers representing a variety of consumer-facing brands, accredited investors, and key media figures, the event is unique in that it seamlessly integrates both business and culture. Extremely well-curated and designed to generate deal flow, MJ Unpacked continues to raise the bar for what cannabis trade shows should aspire to be.

On the outside, MJ Unpacked has the feel of a traditional conference, but peer closer and you’ll find subtle differences that make it truly one-of-a-kind. A large gong at the entrance to the exhibitor hall continually rang out, a sign of a sealed deal.

Color-coded snack tables with names like Orange Sunshine and True Blue framed the show floor while a DJ kept the vibe humming. A mechanical bull, presented by Rootwurks, was likely a first for the B2B cannabis trade show circuit.

The creators of MJ Unpacked were driven by a deep desire to create a space conducive to making deals. Throughout the brand experience hall, dozens of big brands and small companies showcased their products to buyers and investors, hoping to land a potentially life-altering deal.

The constant ringing of the deal gong signified mission accomplished for many attendees. 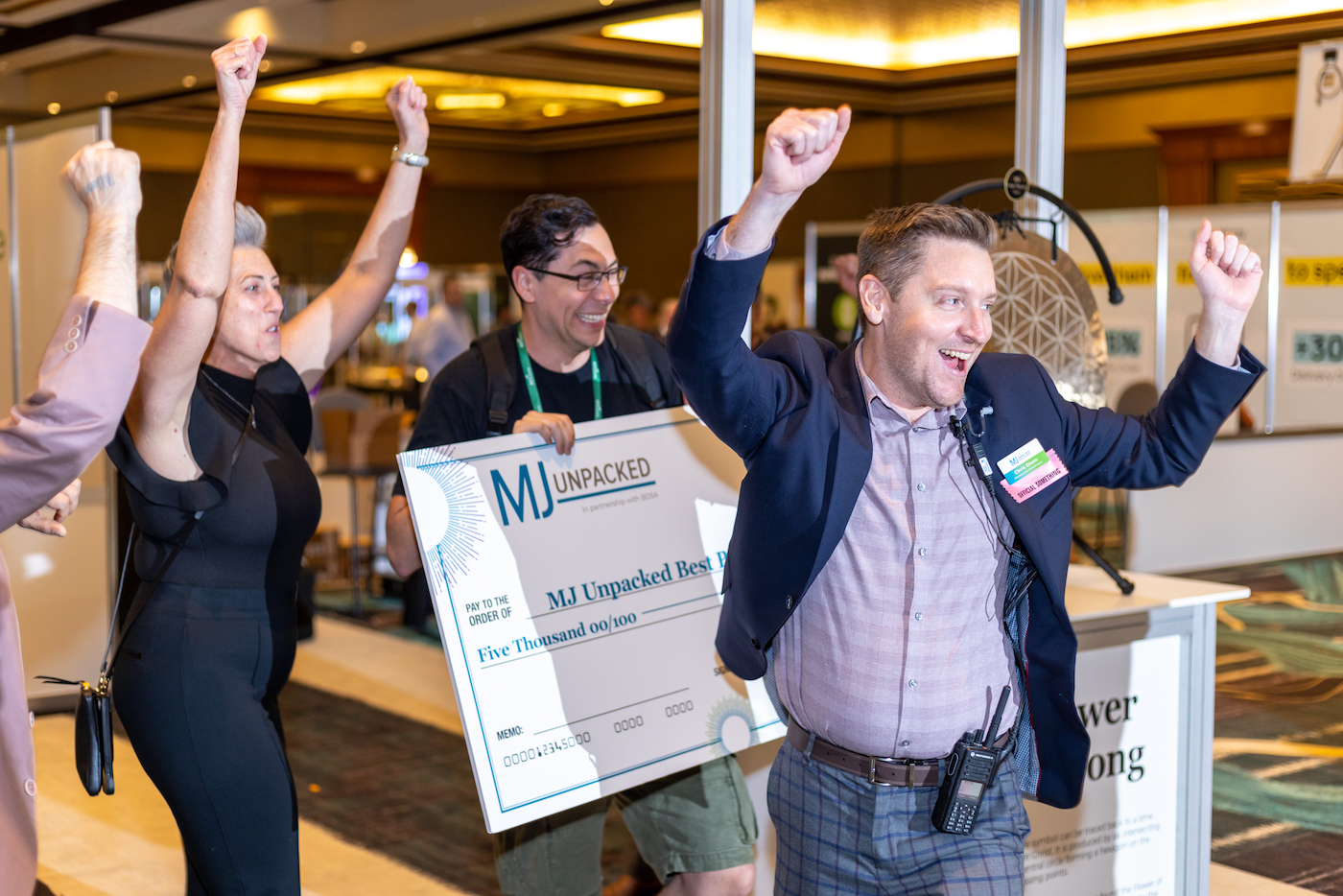 “We were ecstatic to see the types of deals getting done at our event,” said George Jage, co-founder and CEO of MJ Unpacked. “Given the struggles within the current economic climate, it’s clear that people are looking to personally engage face to face and build on meaningful relationships.”

Organizers, in an effort to reduce barriers to entry, offered several ways for brands to engage including scholarship opportunities for social equity brands through a partnership with the Our Academy accelerator program.

BJ Carson, co-founder and owner of apparel line FourFortyEight, participated in the most recent accelerator course. He capped off the 13-week experience with a trip to MJ Unpacked.

“I was honored to be a part of the ‘22 Our Academy Accelerator,” Carson said. “Through this amazing program, our brand was given a chance to get noticed amongst the community we brush elbows with on a regular basis. We were able to meet our goal by connecting with some retail operators that have agreed to place our products. It allowed us to learn about other brands in the community as well which helps strengthen the industry.”

“We were incredibly fortunate to have been invited to MJ Unpacked by Roz McCarthy and Sarah Ceti of Minorities for Medical Marijuana as part of this year’s special Social Brands cohort,” she said. “A big part of what made MJ Unpacked so fun was getting to know the people behind the other social brands, like Black Buddha, James Henry, Axis, Justice Tree, Prehemium, Oakland Extracts, and JADE.”

Howard, who attended the show with business partner Bridget May, felt the ROI of attendance immediately, adding how she was able to network with other like-minded operators and generate deal flow at the same time.

“We made some potentially game-changing connections! Our budget for events is super tight right now, but MJ Unpacked was worth it because of how much the organizers focus on helping brands make connections with investors, retailers, and important partners, both in our own state of California and in other states.”

Over on the Money Stage, hopeful entrepreneurs pleaded their cases to would-be investors thirsty for the next big thing in cannabis. Several companies presented, during both the newly minted Venture Summit and the main programming, setting their sights on expansion and the coveted Best Pitch Prize.

There were many stand-outs pitching at this year’s event but innovative cannabis production tech firm Sorting Robotics took home the top honor, thanks in part to its futuristic Jiko automated freestanding pre-roll infusion robot, which provided plenty of gas to conference attendees. 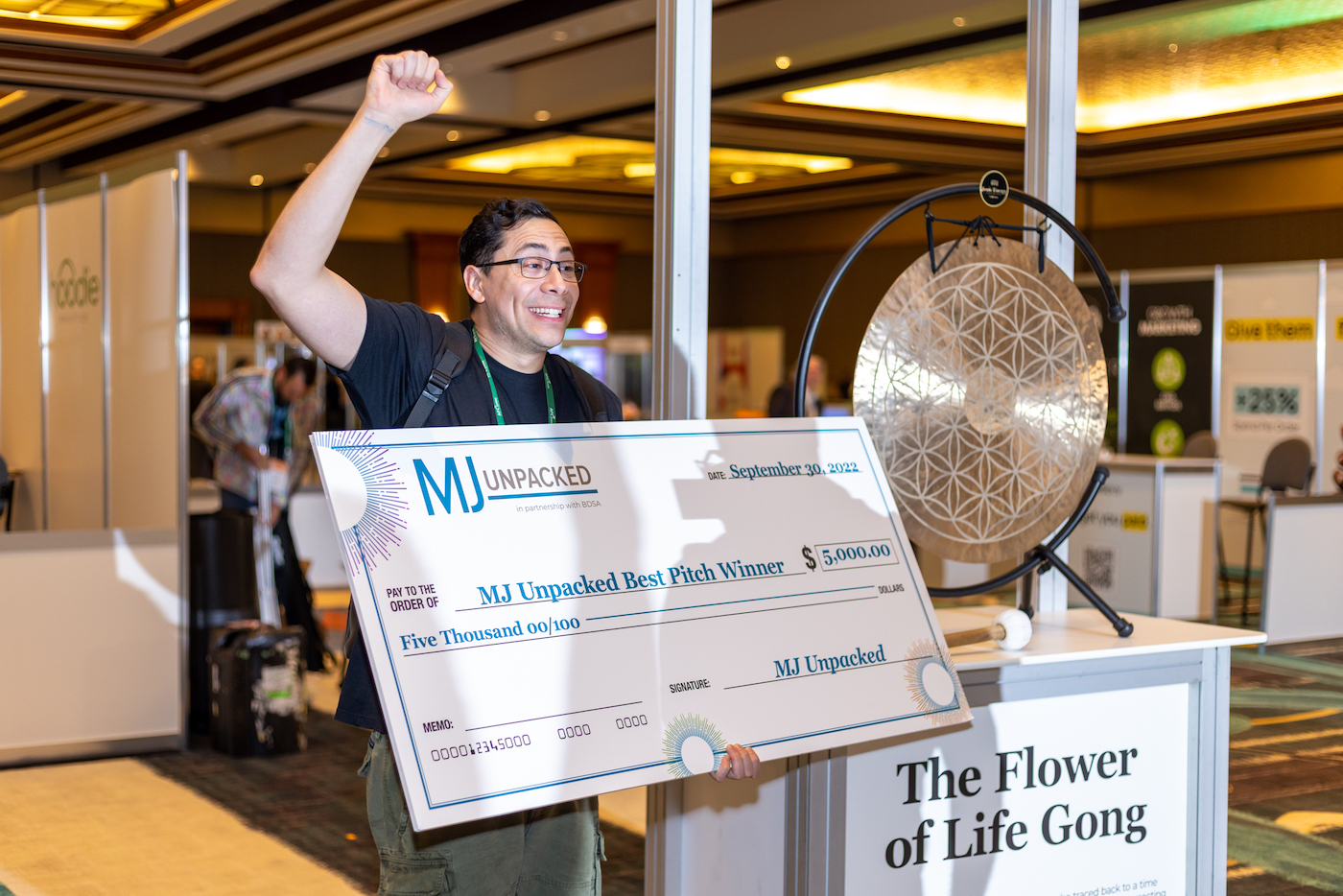 “I think my company is serving a critical need in the cannabis economy and this victory is a validation from the investing community that they agree with our mission of sophisticating the industry with technology,” said CEO Nohtal Partansky.

Event producers expressed delight at the opportunity to change the course of history for participants in the pitch competition.

“Every season we have the pleasure of watching brands tell their incredibly inspiring stories amongst investors on the Money Stage,” said MJ Unpacked co-founder and CMO Kim Jage. “On behalf of MJ Unpacked, we want to congratulate everyone who participated as well as Sorting Robotics on their well-deserved Best Pitch Prize.”

The addition of the Clio Cannabis Awards to this year’s MJ Unpacked agenda was the icing on the cake. Celebrating the creative forces driving the cannabis narrative, the glamorous soiree included a red carpet entrance, champagne reception, and of course, the delivery of glistening trophies to the Grand Clio winners.

Rapper turned marijuana mogul Berner was on hand to accept an honorary award for his contributions to cannabis culture, receiving a standing ovation upon his entrance. 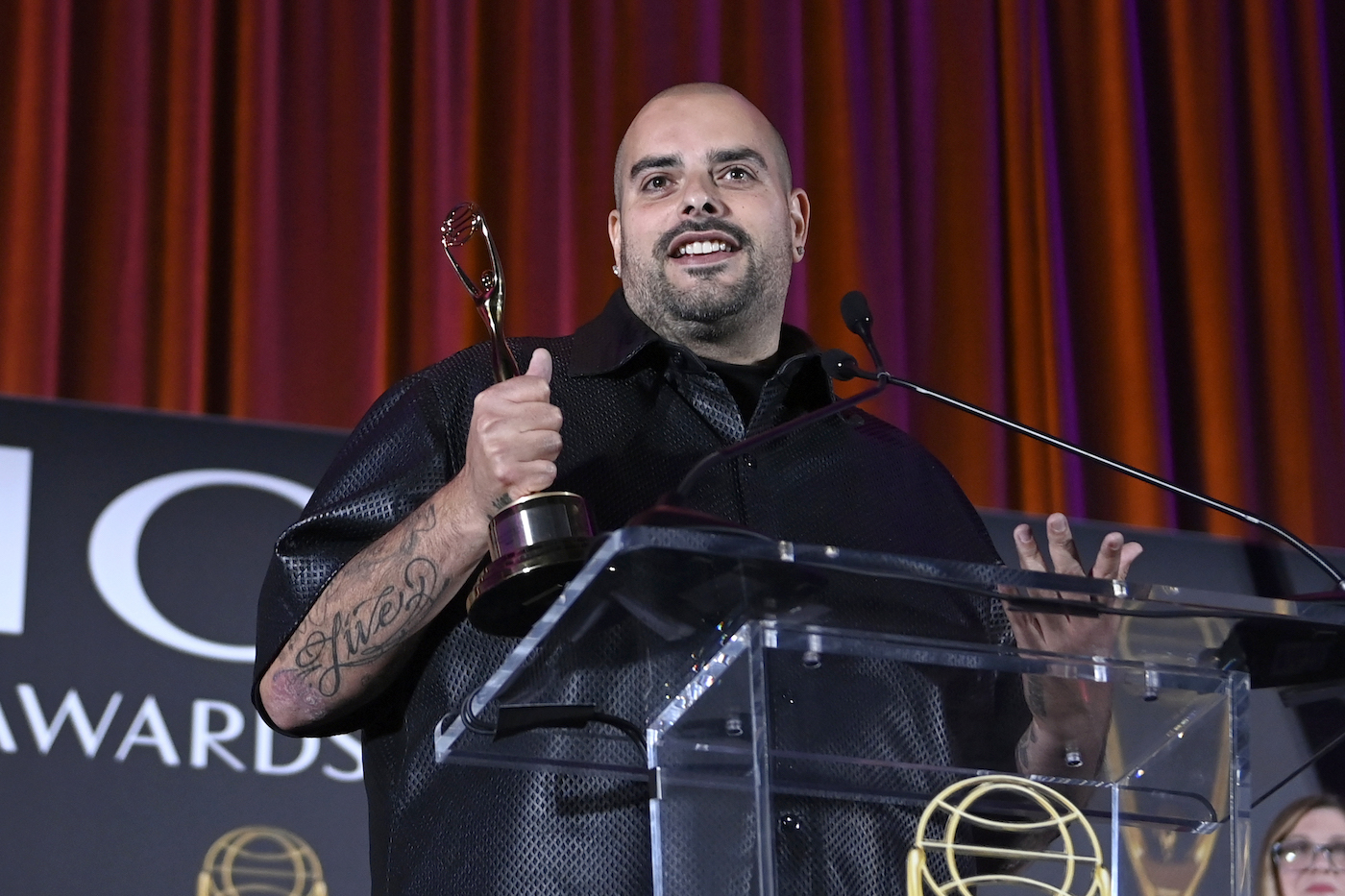 “This is a tough industry, there’s nothing easy about this. But know that everything we’re doing is normalizing it and pushing it forward,” he told the crowd.

Accolades for Agency of the Year went to German firm Jung von Matt for their quirky and massively viral hemp bus ticket campaign. Ubiquitous low-dose beverage company Cann took home Brand of the Year, thanks in part to their vibrant campaigns and slew of celebrity endorsements.

“The heartfelt remarks from our winners were standout moments,” said Michael Kauffman, executive director of Clio Cannabis and Clio Music.

“Humble, grateful, and inclusive of each team’s members with important statements from most. Everyone got a kick out of Jung von Matt’s acceptance video for Agency of the Year, and there wasn’t a dry eye in the house when Luke Anderson shared a beautiful memory about his mother during Cann’s Brand of the Year trophy acceptance. It was heartwarming to see his team rally around him in comfort and support.” 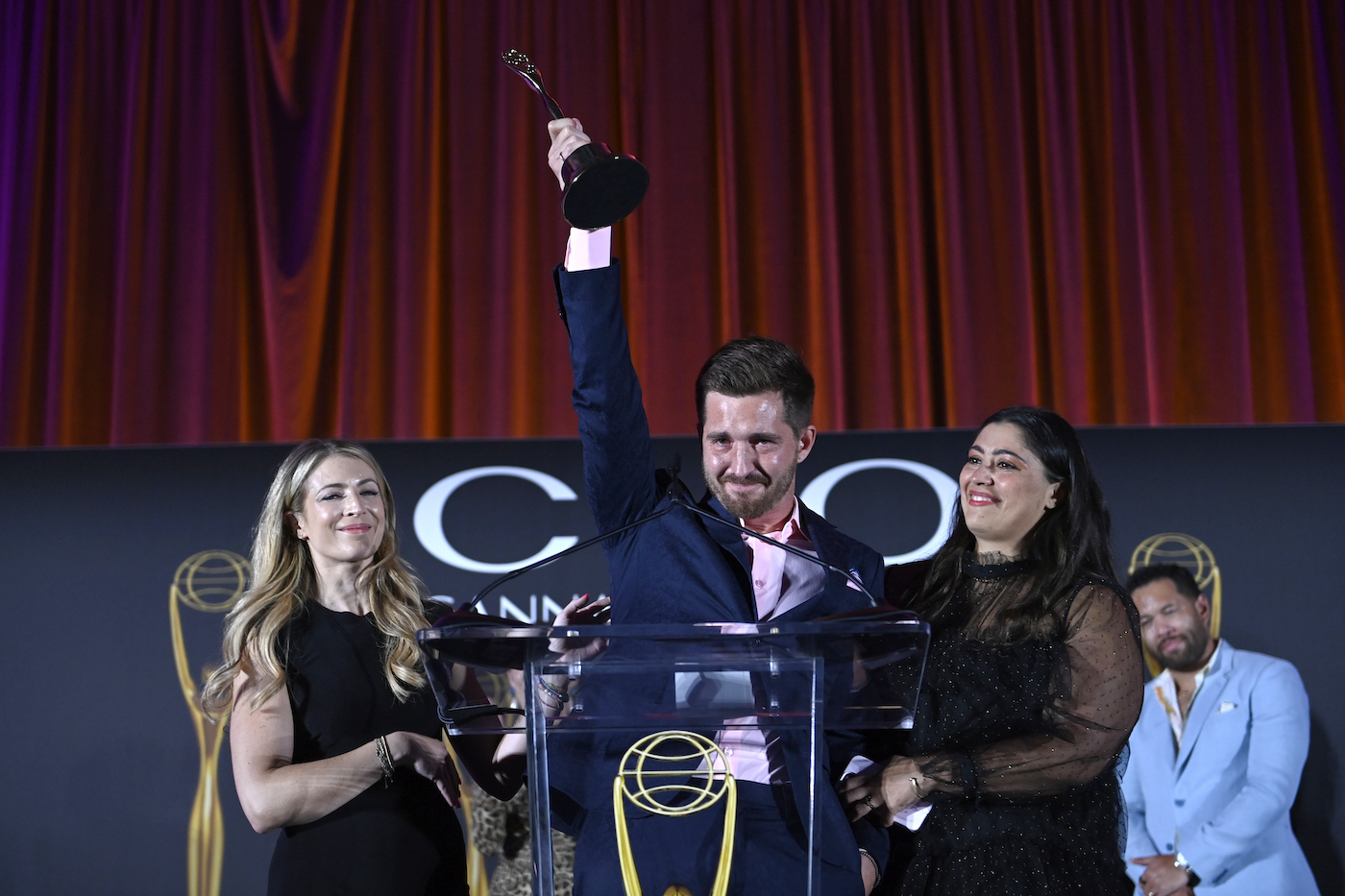 The overwhelmingly positive response to Clio’s partnership with MJ Unpacked did not go unnoticed, with plans already being put in motion for next year’s event.

“Overall, the sentiment was one of gratitude for Clio shining a spotlight on a creative side of the industry as well as an appreciation for the professionalism of the event,” Kauffman said.

MJ Unpacked sights set on 2023 and beyond

After a whirlwind week chock full of meaningful interactions, blaring gongs, and Vegas amusements, one thing was certain by all accounts: MJ Unpacked is here for the long haul.

Dates have already been set for next year, seeing the event return to New York for its second East Coast iteration in April while the flagship Vegas show is on for September.

For George Jage and the rest of the production team, the response has literally been a dream come true.

“Our team truly witnessed the purpose of MJ Unpacked this season and we look forward to our New York show in April 2023.”

Rick Ross Is Launching a Line of Hemp Cigarettes

What Are the Benefits of CBD for Depression?

Delta-8-THC Businesses Have Raked in $2 Billion Since 2020

Should I Take CBD Before Or After A Workout?

Is Kratom Legal in the U.S.?