It all started in 2013, at the end of a dirt track in a rural section of New York’s Hudson Valley where a humble white farmhouse stands among a few colonial-red barns. Old Mud Creek Farm, as it’s called, had been put up for sale by the agrochemical giant Syngenta, which had used the 386-acre property for years to test products—fertilizers, pesticides, herbicides—on corn and soy crops. Nothing remarkable, just another tract of heavily used industrial farmland in a region where people have been rushing to get out of the industrial farming business.

Who would buy such a place?

Abby Rockefeller, the septuagenarian daughter of the late David and Peggy Rockefeller, sent her farm manager, thirtysomething Ben Dobson, to negotiate a price. She and Dobson are now co-­founders of Hudson Carbon and Hudson Hemp, two startups with a joint mission to: research and promote regenerative organic agriculture and carbon sequestration; farm hemp; perform complex botanical extractions; and, along the way, make and sell an exquisite line of CBD-infused wellness products called Treaty. Old Mud Creek’s “depleted, dead” soil, as they call it, was exactly what the two were after.

Abby Rockefeller, who hopes to bring agricultural and economic prosperity to the Hudson Valley through ventures launched at Old Mud Creek Farm, attends a dinner to celebrate a hemp harvest.

The farm is located in the town of Livingston, a two-hour drive north of New York City, and it borders a much larger property, Stone House Farm, which Rockefeller and her siblings inherited from their parents and still oversee today through a foundation. Rockefeller had long had her eye on the smaller place. “A beautiful piece of land,” she told me during a Zoom call this spring. “It’s called Old Mud Creek not because the water is muddy but because the bottom is muddy.” She had wondered if there might be a way to transition the land from conventional to organic farming and simultaneously gather scientifically useful data on chemical and carbon changes in the soil. It sounded straightforward, but she would soon learn it had never been done before, not in the detail she imagined.

She and Dobson met through her son Christopher Lindstrom, who attended Bard College at Simon’s Rock with Dobson two decades ago. “ ‘You have to get Ben!’ ” Rockefeller recalled her son telling her when she began to hatch her newest environmental initiative. Rockefeller has bright eyes and wavy gray hair that falls past her shoulders. “He practically yelled, ‘Ben Dobson is an amazing farmer!’ ” Dobson is an amazing farmer. He can grow anything anywhere—a fact that does not come as a surprise to anyone who knows his background. His parents are Anne Banks and Ted Dobson, early pioneers and stars of the organic food movement. He was born and raised on a farm right down the road, in Hillsdale, and he has worked in organic agriculture, in one form or another, pretty much his whole life. 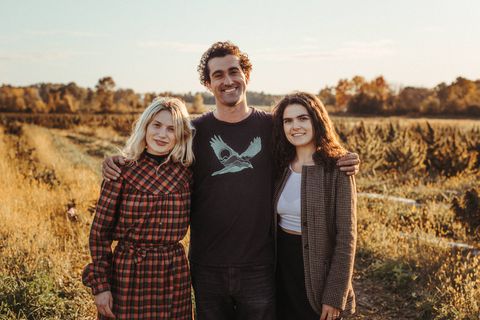 Rockefeller bought Old Mud Creek Farm, and in 2016 Hudson Carbon began a partnership with Woods Hole Marine Biological Laboratory. A team of scientists from the Massachusetts-based research institute descended on the farm to set up observation equipment. The question they hope to answer at the end of the experiment: Can regenerative agriculture positively affect climate change and, executed at scale, even contribute to its reversal?

“We’ll have Hemp Kush. Electra. Lifter. CBG White. Cherry Wine. And…we love our Sour Space Candy!” Dobson was shouting to be heard above the growl of his truck as it bounced along a dirt road during a recent visit to Old Mud Creek Farm. He wanted to show me the fields and tell me the names of the hemp varietals he planned to plant in ­contour-based patterns. “It’s indica crossed with sativa!” he said of one variety’s unique attributes. Stretching out a long arm, he pointed to a section of field where he will rotate hemp with “wild­flowers mixed with perennial grasses and legumes,” crops he says are “vital to the land and to our business.”

As executive director of Hudson Carbon and CEO of Hudson Hemp, Dobson oversees day-to-day operations, but he is in constant contact with Rockefeller. “She and I both feel the need to rescale agriculture and how people think about the environment,” he said. “That means moving from industrialized farming—with its focus on the use of synthetic fertilizers and chemical pesticides—back to smaller family-run farms growing food for their communities.” The parallel goal of promoting regenerative agriculture, he says, is creating richer farmland and conditions whereby more CO2 is converted into soil carbon than is released into the atmosphere. 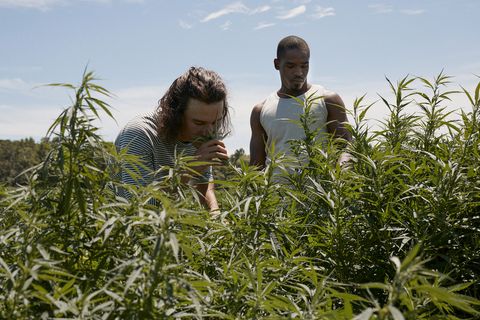 Hemp grows quickly and heartily in the Hudson Valley. Here, staff check the crop before harvest.

It was Dobson who suggested planting hemp, Rockefeller said on our Zoom call. He explained that it’s considered a bioremediating plant, which means that as it grows—vigorously and with very large root systems—it cleans heavy metals from the soil and brings carbon back into the soil. In 2017 Dobson secured the 10th permit ever issued in the state of New York to grow hemp and promptly planted 10 acres of it. In 2018 he and Rockefeller tripled that amount, stepped up research on its beneficial properties, and went deep into development of the Treaty CBD brand and products. They also ordered processing equipment from California and Germany and built a state-of-the-art facility in one of their barns to extract CBD (and soon, perhaps, THC).

“The hemp has been diverse and exciting,” Rockefeller said. “A good crop for so many things. I didn’t know about its potential as a building material.” Rockefeller has been supporting and launching environmental initiatives for most of her adult life, and she said she likes to try new things. She was an early advocate in the fight against water pollution caused by sewage being dumped into the nation’s water supply. A 2005 article in the Chicago Tribune noted, “Abby Rockefeller, a descendant of John D., was the first American to install a composting system in her home in Cambridge, Mass. By 1973, she had founded Clivus Multrum, which remains the largest distributor of composting toilets for public use in North America.” That company is still going strong 50 years later, even though, Rockefeller said, “I was not at all a talented promoter of it.”

The Treaty line is made with CBD sourced from the hemp grown on Old Mud Creek Farm along with regionally grown botanicals.

Marketing has not been an issue with this latest venture. “We’ve really enjoyed using excitement around the hemp,” Dobson told me with a smile. “It gets people’s attention.” During their first planting season, passersby—including a local sheriff—would pull over and get out of their cars to stare at the fields of plants, which look a lot like ones people used to try desperately to hide from public view. “By bringing it to the farm with the carbon project, we’ve had this beautiful opportunity to display how it fit together as part of a new vision for regenerative agriculture.”

Industrial hemp and psychoactive marijuana come from sub­varieties of the cannabis plant. They look similar, but according to federal law, hemp must have less than 0.3 percent THC (the substance that produces pot’s high). Selling or growing either was long illegal in the United States, but in 2018 Congress passed a farm bill that made it legal in all 50 states to cultivate hemp and in many states…