In a report to the county Board of Supervisors this week, County Counsel Michael Ghizzoni described several enforcement actions initiated by the county against cannabis operations in the Carpinteria Valley and west of Buellton.

Speaking during budget hearings on Tuesday, Ghizzoni told the Board of Supervisors that, acting on eight odor complaints from Carpinteria residents, the county filed a lawsuit in Santa Barbara Superior Court on May 21 against Island View Ranch LLC and Island Breeze Farms LLC – the landowner and operator, respectively, of a two-acre cannabis “grow” at 3376 Foothill Road.

The lawsuit alleges that the business has been a “continuing public nuisance” since at least March of 2019 and should be shut down. It is the county’s first public nuisance lawsuit against a cannabis operation.

Island Breeze, the lawsuit contends, “has not diligently pursued” a zoning permit for more than two years and is illegally growing and packaging commercial cannabis without proper county and state business licenses. Those licenses, it states, can be granted only if a grower is “in the process of complying with local ordinances.”

In another first for the county, Ghizzoni said, the lawsuit also invokes the state’s Unfair Competition Law against a cannabis grower, alleging that Island View and Island Breeze are profiting “to the detriment of lawful cannabis businesses operating in the county” by misleading the public and failing to comply with “regulatory safety measures.”

Representatives of Island View and Island Breeze could not be reached for comment this week.

In a separate matter, Sunshine Organics Greens Inc., a 144,000 square-foot greenhouse operation at 6030 Casitas Pass Road, “surrendered” its 12 provisional state licenses for cannabis cultivation to the California Department of Food and Agriculture on June 7, Ghizzoni told the board.

It was another first, he said; the county had previously notified the state agency that Sunshine Organics was not moving expeditiously through its zoning permit application process. Ghizzoni said the county also told state officials that the landowner had withdrawn his authorization for Sunshine Organics to grow cannabis there.

County records show that Joseph Magazino, the Sunshine Organics operator, filed a lawsuit last year against Case Van Wingerden, the property owner; the suit is set for trial in Superior Court on June 15. 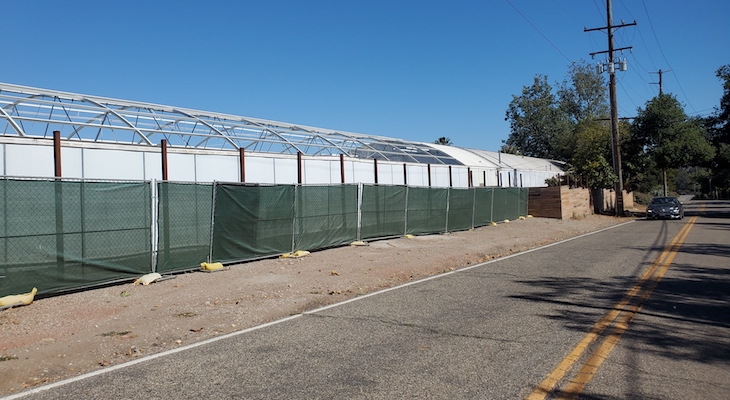 The Island Breeze cannabis operation, shown here at 3376 Foothill Road, is across the road from the entrance to the Polo Condos, a complex of 140 apartments next to the polo grounds. (Credit: Anonymous)

Finally, on June 4, Ghizzoni told the board, the operators of Lion Eye LLC, a 12-acre outdoor cannabis operation at 7261 Domingos Road west of Buellton, withdrew a lawsuit they had filed against the county.

Ruling in the case in March, Administrative Law Judge Eric Sawyer found that the Lion Eye owner, Elizabeth Story Long, and her agent, Stacey Wooten, had illegally installed 56 hoop houses in 2017 and expanded their cannabis cultivation into a small barn and Quonset hut, in violation of the county zoning ordinance. From a couple hundred marijuana plants in 2015, the operation had expanded to 8,000 plants.

In 2015, Lion Eye was a small medical marijuana “grow.” The county allowed Lion Eye to continue as a “legal, non-conforming” operation after 2015 if it applied for a zoning permit and county and state business licenses. Under the county zoning ordinance, “legal, non-conforming” operations may not be “enlarged, extended or increased” without a permit.

In early 2019, the record shows, acting on a complaint about unpermitted hoop structures at Lion Eye, the county Planning & Development Department sent the operators a notice of zoning violations and gave them 30 days to remove the illegal plantings.

Judge Sawyer found that the installation of 56 hoop-houses at Lion Eye represented “a significant change to the operation of the premises,” noting that the plantings “can now extend throughout more of the year after the weather turns cold.” In addition, he said, the testimony in the case confirmed there had been no marijuana plants in the barn or the hut at Lion Eye in 2015.

The judge upheld a $9,500 fine that the county had assessed against the operators in early 2020 for failing to remove the illegal plantings; he said Long and Wooten were jointly responsible for paying it.

As of a county inspection on June 2, Ghizzoni said this week, all of the illegal plantings at Lion Eye have been removed, and the operators are pursuing a zoning permit and business licenses.

Melinda Burns volunteers as a freelance journalist in Santa Barbara as a community service; she offers her news reports to multiple local publications, at the same time, for free.