What Are The Different Kratom Strains & How Did They Get Their Names?


Decisions, decisions … It seems like every consumer product comes in dozens of different varieties, enough to give the most decisive person analysis paralysis. With hundreds of years of use and development behind it, Kratom is no exception.

A quick visit to your favorite Kratom vendor will leave you astounded by the sheer variety of choices available. Strange, exotic named Kratom products greet you everywhere you look. That’s not a marketing stunt, by the way; it’s a natural byproduct of the plant’s origin. Since the plant is found in Southeast Asia, its nomenclature is heavily influenced by that location.

In our 5th article here at The Weed Blog, we are going to take a closer look at the different Kratom strains, and how they get their names. So, read on to learn more!

With Kratom, you have two major decisions to make when you buy – the color, and the strain. While all Kratom comes from the plant Mitragyna speciosa, trees grown in different regions have evolved with different genetic profiles. This has resulted in different alkaloid profiles and different reported effects for the many strains of Kratom available. (Reminder: Naturally occurring alkaloids are the active ingredients in Kratom.)

What Are Different Kratom Strains?

Kratom strains are NOT different species of the plant. In fact, all Kratom strains share the same genetic material and belong to the same species of plant known as Mitragyna speciosa. What differentiates Kratom strains is the region where it originated, the cultivation methods used, the harvesting process, and environmental factors, just to name a few. All of these different variables end up providing each Kratom strain with a unique alkaloid profile.

One way to look at this is by studying tomatoes. There’s only one tomato species out there, but there are hundreds of tomato varieties available around the world. Although they are genetically the same plants, a variety of factors have caused different genetic material to be active in the plant.

When different genetic material is active, you find different characteristics exhibited by the same plant. As people get increasingly picky about what traits they enjoy in their Kratom, these small differences begin to matter and that’s where we get the many different strains of Kratom.

Many Kratom strains get their names from their country or region of origin. Because Kratom is primarily grown in Southeast Asia, you’ll often find names that include areas like Thailand, Bali, Malaysia, Sumatra, and so on.

Seasoned Kratom customers develop the taste to discern the subtle differences between strains with genetic roots in different regions, and eventually settle on a specific source as their favorite. 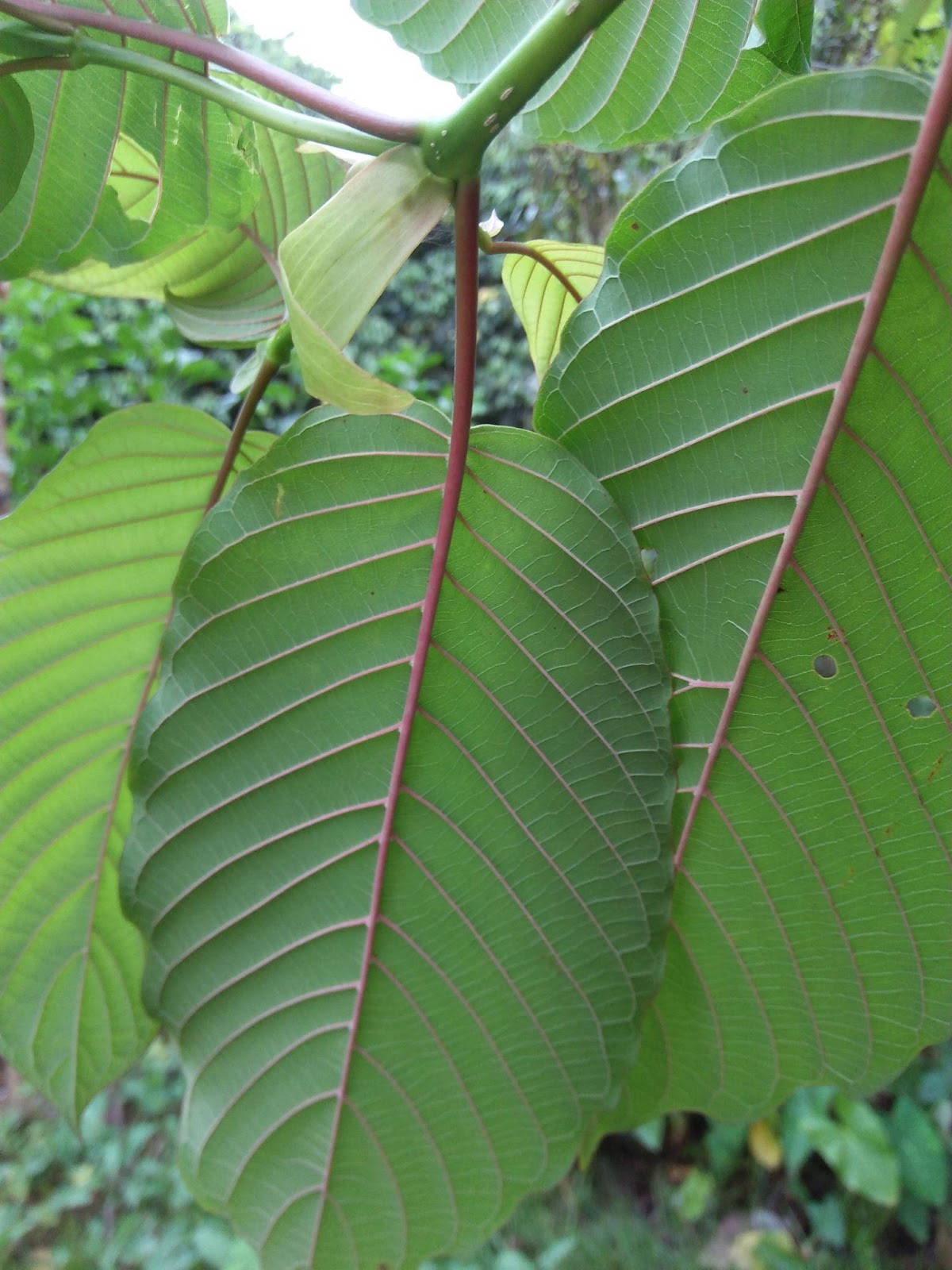 Kratom Strains by Colors or Veins

If you’ve ever seen raw Kratom products such as leaves or powder, you may have been struck by the distinctive colors they come in. The color of Kratom is affected by 2 factors – maturity of the harvest and the drying process.

Kratom leaves exhibit veins of different colors that correspond with the leaf’s maturity. White veins are thought to be the least mature, with red at the other end of the spectrum and green in the middle.

These differences may account for subtle variations in Kratom’s hue, but the plant’s primary characteristics – colors, flavors, and alkaloid profile – are brought out by drying, or curing, the leaves. The drying process – both the length of time and whether the leaves were exposed to direct or indirect sunlight – is highly technical and many farmers have their own proprietary methods to ensure consistent and high quality products.

In recent years, a new yellow strain of Kratom has become popular. Interestingly, there are two different yellow Kratom strains available in the market, but most retailers do not bother to educate their customers on their differences. In short, one type of yellow vein Kratom is the result of the drying process and the other type of yellow vein Kratom is actually a blend of multiple different strains.

Other Kratom Strains and Names

“Maeng Da” loosely translates to “pimp grade” in Thai, which is used in reference to high-grade Kratom. Maeng Da Kratom is usually obtained by grafting multiple strains of Kratom to obtain the most powerful and desirable effects from the parent plants.

In contrast, “Horned” merely describes the shape of the leaves. A rare mutation gives some Kratom plants horned leaves. This distinction allows Kratom consumers to identify and use horned Kratom if they’ve enjoyed that particular strain in the past.

You may see other names related to Kratom, in addition to color and region. These are often taken up by individual vendors to label specific blends and small batches or to attract new consumers.

Now that you are familiar with how Kratom strains get their names, let’s take a closer look at a few of the most popular strains out there.

Bali, also known as the OG, is by far the most popular Kratom strain in the United States. It originates in Bali, an island in Indonesia. You can find Bali in every formulation, including red, green, white, and yellow vein varieties.

As the name indicates, Maeng Da Thai traces its origins to Thailand. However, its immense popularity has galvanized farmers in Indonesia and Malaysia to take up its cultivation. Traditionally, Maeng Da Thai is available in red, white, and yellow veins only.

Indonesia is home to multiple Kratom strains and Super Indo is one of the most popular. It beats out most other Kratom strains in terms of raw alkaloid content.

Red Dragon is one of the newest Kratom strains and an interesting find. It has a higher alkaloid profile than that of many other Thai strains, and yet, in some cases, it’s less expensive.

Borneo Kratom is one of the oldest, most popular, and widely available strains on the market. Originating in Borneo, an island divided among three countries (Indonesia, Malaysia and Brunei), Borneo Kratom is relatively well-balanced. It’s available in red, white, and yellow vein varieties.

Kali is grown in Kalimantan, a region of Indonesia known for its lush rainforests. This unique strain is typically only available in red vein varieties.

With so many choices, it may be hard to know where to start. The best choice is to just pick one that sounds promising and dive in. If you don’t find what you’re looking for, you can always try a different strain. The good news is that with so many options and varieties available, anyone with an adventurous spirit can find a Kratom product that’s right for them.

Kraken Kratom aims to offer the best quality, most thoroughly tested Kratom products on the market, from powders and extracts to capsules and tablets.

The Need to Upskill Quickly in Fast-Growth Industries